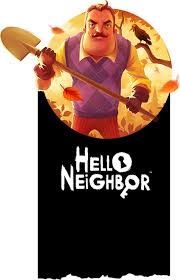 Neighbors have always led to all sorts of peculiar characters. From the tiresome Ned Flanders from the The Simpsons to the overacted characters from the Australian series of the same name, neighbors have always played an important role in many TV series and movies. And now, one in particular, also stars in one of the most awaited video games of the year 2017, the alpha version of which is ready to be downloaded: Hello Neighbor.

What is Hello Neighbor?

Well, it’s basically a stealth horror game with graphics that will remind us of an animation or cartoon movie, the approach of which is the following: we’ve just moved into a new neighborhood and we just don’t have a good feeling about our new neighbor. We’re sure he’s hiding something in his basement and, as couldn’t be otherwise, we have the great idea of sneaking into his house as stealthily as possible to unravel his secret.

With this plot, that may remind you of Rear Window by Alfred Hitchcock, a movie that told as about the adventures of a James Stewart, with a broken leg, while spying on his neighbor whom he suspects has killed his wife. Based on a similar principle, we’ll have to break into our neighbor’s home using all sorts of tools to knock down walls and dodge other obstacles that will come across in a game that will keep you on the edge of your seat.

However, don’t expect anything similar to other horror games like Five Nights at Freddy’s, Resident Evil or Alone in the Dark. The settings are less gloomy thanks to its rather childish graphics and the game is more about thinking how to solve each situation, rather than an action title.

After reading all the latter, you’re probably really up for playing this game, especially if you’re already seen its stunning trailer, and you’ll want to know if your computer is capable of running it. But, before anything else, you should know that it’s a game that’s still at alpha stage, therefore it can be somewhat unstable and buggy. Right now, you can download the latest version developed by Dynamic Pixels from their official website (after completing a free registry), but once the final version is launched, it will be available on Steam.

And to play the full version, which we expect to be out by summer of 2017, you’re going to need a PC with an i5 processor or higher, Windows 7 or above, more than 6 GB of RAM and over 2 GB of free space on your hard drive. If you meet all these conditions, get ready to play one of the best games of the year, which will surely bring out versions for other platforms, such as Android, and if not, you’ve still got time to save up for your next hi-tech computer.