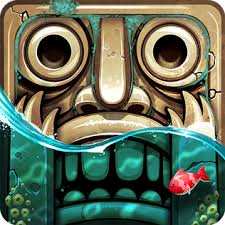 Temple Run is the 3D endless runner platform game in which our goal is to escape from some kind of temple set in a Central American jungle. Nobody can deny that its aspect is inspired by video games of the likes of Tomb Raider and movies such as any of the films from the Indiana Jones saga, in which we’ve seen plenty of scenes with Lara Craft or Harrison Ford trying to escape from temples full of traps, obstacles, and rolling balls whilst running at full speed.

Go back for the cursed idol

The first part of Temple Run was a huge hit on Android and iOS in the number of downloads, and Temple Run 2 has also followed suit. It comes along with the same game mode but with plenty of new dangers and a renovated graphical aspect that improves that of the first installments. Therefore, our mission is to run around at full speed avoiding all the dangers such as cliffs, drops, and all sorts of obstacles placed on different heights on our way, forcing us to jump, slide, glide, or dodge in order to not fall off the edge. All the latter, in our attempt to escape with the cursed idol.

Furthermore, there are more characters to play with and also new worlds and scenarios to race around, that make this game even more appealing than the first installment. All in all, we’re talking about a great action and adventure game that you can’t miss out on if you like frantic entertainment. And we’re sure you do since you’re here reading this review.

These are the main features that we’ll find in this game:

However, you should be warned before you hit the download button: this isn’t a native version of Temple Run 2 for Windows. What we’re offering you is the APK for Android smartphones and tablets together with BlueStacks, the best software to emulate this operating system on our PC with great functions and an outstanding performance. You’ll simply have to install this program and once running, drag the game’s file to the main interface in order to begin the installation process. And don’t worry about the fact that you’d usually play this kind of game by means of touchscreen gestures on your mobile device: BlueStacks will adapt those controls to your mouse and keyboard.

What’s new in this version