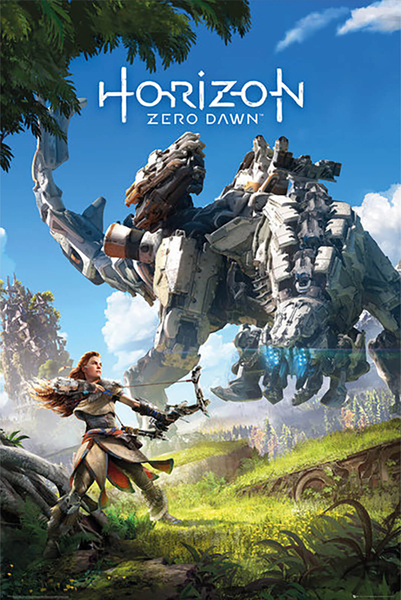 $14.99
Horizon Zero Dawn could just be the most gorgeous PlayStation 4 game yet. I was awestruck from the moment I entered this post-post-apocalyptic world where nature has reclaimed the Earth following an unknown cataclysmic event. Lush, dense woodlands give way to soaring, wintry alpines as far as the eye can see. High altitude vistas provide panoramic views of sun-scorched deserts where the remains of a lost civilization can be seen. It’s all so breathtaking to take in, and perfectly showcases how much potential the PS4 console holds.

Horizon Zero Dawn could just be the most gorgeous PlayStation 4 game yet. I was awestruck from the moment I entered this post-post-apocalyptic world where nature has reclaimed the Earth following an unknown cataclysmic event. Lush, dense woodlands give way to soaring, wintry alpines as far as the eye can see. High altitude vistas provide panoramic views of sun-scorched deserts where the remains of a lost civilization can be seen. It’s all so breathtaking to take in and perfectly showcases how much potential the PS4 console holds. 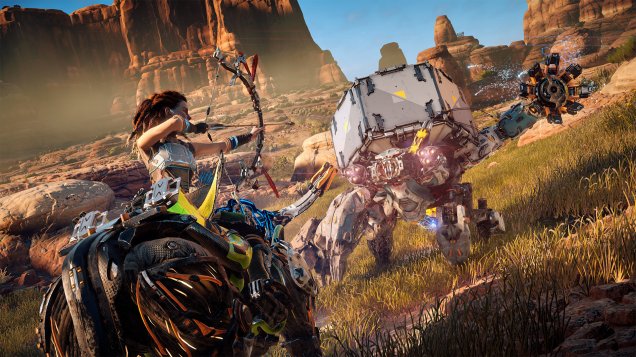 Horizon was developed by Guerrilla Games, best known for their Killzone franchise, including PS4’s launch title Killzone Shadow Fall. This is the very first action RPG from this talented developer, and it was built using their cutting-edge Decima engine. Decima is one of Sony’s most powerful game engines and was used in Shadow Fall, Until Dawn, and the upcoming game Death Stranding from Kojima Productions. If you’ve seen any of those impressive games in action, you’ll know just what this powerful game engine is capable of. 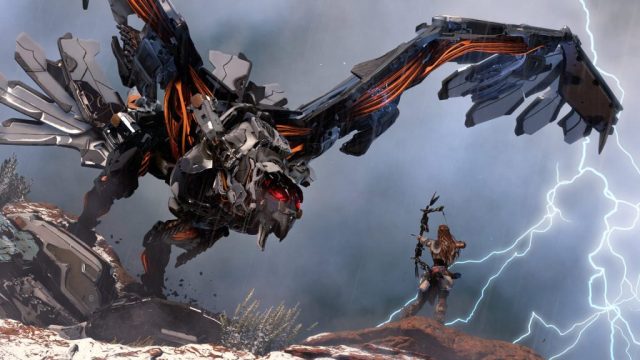 Experiencing a brand new game world is generally an exciting endeavor, and this couldn’t be truer than with Horizon. Aloy, the game’s main protagonist, is a wonderfully well-rounded character, instantly likable because of her wry sense of humor, and staunch determination to do what’s right. Her unrivaled hunting prowess, including her masterful bow skills, only adds to her appeal.

Aloy is also instantly relatable. She’s an outcast from a Matriarchal hunter-gatherer tribe called the Nora, shunned at birth and forced to live in the dangerous wildlands with her guardian father figure Rost. Aloy has no knowledge of who her mother is, or why she was banished at such a young age. Finding answers to these basic existential questions becomes her life mission, as is gaining acceptance among her peers—aspects many of us can surely empathize with in one way or another. She also places logic and common sense above blind adherence to the status quo, an admirable quality that’s easy to relate to.

I mentioned that the wildlands are dangerous, but let me emphasize that life outside the walled tribes of this Earth is very, very treacherous. That’s because hostile robotic “Machines” roam the land, and day by day they are getting more aggressive. Some resemble dinosaurs, such as the velociraptor-like Watchers, while others are hulking mechanized versions of everyday animals including crabs, horses, deer, and crocodiles.

Making things worse, new species of Machines are popping up at an alarming rate, each one more deadly than the last.

Visually, the Machines are nothing short of awesome. They have striking designs that combine layers of sleek metal plating with futuristic weaponry attached to their body. Looking closer, Machines have subtle weak points susceptible to various types of attacks, including melee strikes, fire, electricity or ice. As Aloy, you’re able to identify these vulnerable spots using her “Focus” scanning device, which she discovered in a mysterious cave as a young girl. 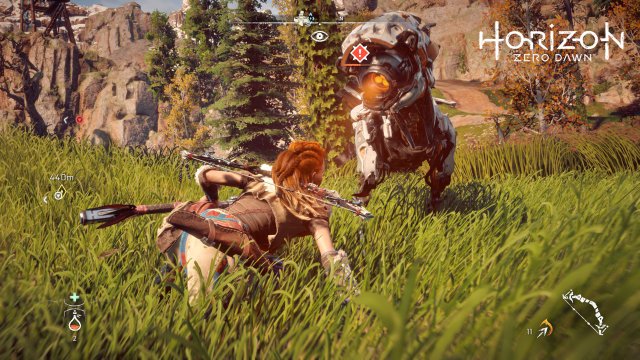 Another aspect I want to point out is how amazing Horizon‘s mechanical ecosystem is. Each Machine plays a different role that contributes to their shared survival. For example, Watchers are usually found among a herd of Machines and act like the group’s eyes and ears. They pace to and fro with their every-watchful eye peering out to spot dangers so they can alert the rest.

At the other end of the ecosystem are Scrappers. These hyena-like scavengers possess razor-sharp teeth to carve out precious materials left by the remains of fallen Machines. Despite their metallic composition, they come off as a living, breathing creatures as diverse and dependent on each other as animals out in the wild. 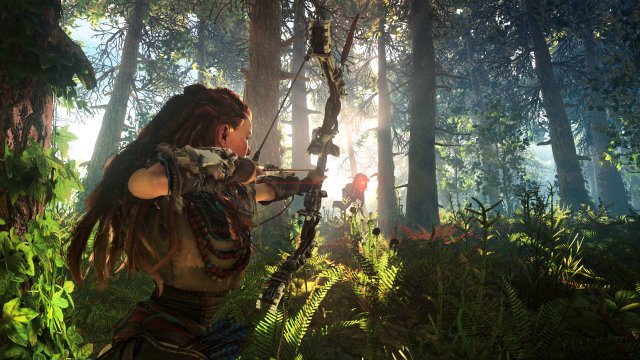 I sometimes get sidetracked for hours hunting in Horizon, a testament to the game’s incredible gameplay. Aloy is an outstanding archer who’s also proficient at laying traps and engaging in close-range spear combat. Her ace in the hole in the aforementioned Focus device, which not only highlights Machine weak points but also marks their walking route. Gaining such vast intel on your enemies gives you a huge leg up, and is especially needed when confronted by the strongest of Machines.

Using Aloy’s “Concentration” skill you’re able to slow down time much like bullet time in Max Payne, letting you accurately aim at Machine weak spots. Not only does this inflict significantly more damage, but you have a chance to knock off highly valuable Machine parts. Some of these hard-to-find parts can be traded with merchants for new weapons and gear, or they can be sold at a high price. I love how Horizon rewards skilled shots with extra payoffs, encouraging you to use stealth and practice your aim. 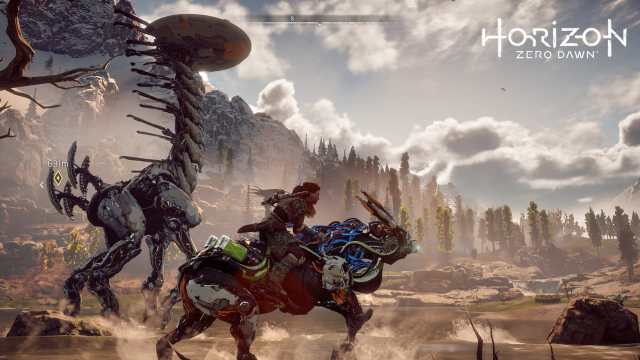 Far Cry 5 launches on Xbox One